About Us and the Guides 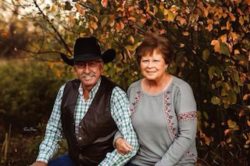 John is an older fella, in fact none of us are too sure how old. We heard rumor he helped build the first railroad if that gives you an idea though. John was the President of Montana Guides and Outfitters in 2006 and 2007 and is a past 2 year term member of the Private Lands/Public Wildlife Council. He is also a present member of the Montana Board of Outfitters which is a 5 person board appointed by the governor of Montana.  Although he may be a bit weathered, it does not show for he can still hike the hills, cape a deer in 24.7 seconds (give or take a second or two), and spot a great trophy anywhere in the landscape.  Just be sure he changes is glasses towards low light. He has been known to head for camp during prime time hunting because he was wearing his sunglasses, turns out it makes it look a lot darker than it truly is.  His personality, knowledge and experience for hunting is something a younger guide or outfitter could only hope to have in their future. 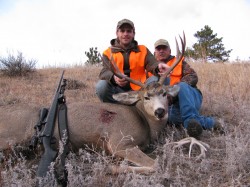 Jeanie cooks, cleans, books hunters, helps organize and sends hunting applications. She also checks to make sure they are correctly completed and sent to the state of Montana (and somehow finds time to keep John in line). Her cooking is really something else. We can assure you that if you do not gain weight during your hunt, it’s your fault for not eating enough do to the fact that there are always mass amounts provided. Her hardy meals with always a wonderful desert are sure to put a hunter to rest earlier than they had intended. John and the guides particularly enjoy her flat cake. You ask what flat cake is? And all we can say is you will just have to come to camp and try it while hearing the story behind the extravagant creation. She is one of the nicest and warm hearted persons you could ever meet. Just be sure to stay out of her kitchen when she is preparing a meal, you would not believe how much a spatula can hurt even when you’re a grown adult.

Pictured here is Roger Bryant, a 38 year old Virgo who has been hunting himself for 26 years and with Cottonwood Outfitters for 10. If you are entertained by

“stories” and want to hear lots of them, Roger is a good match. Roger is a busy man with a family and a full time job on a ranch/farm, but finds time to primarily guide for rifle deer with Cottonwood.  Roger is a great time for any of our hunters and works hard to be sure their hunting experience with Cottonwood Outfitters is exactly what they expected.  His years of hunting himself and guiding have given him great knowledge towards big game behavior, a must to an enjoyable and successful hunt.  If he whips out a little book while you are on your hunt don’t worry, nothing is horribly wrong, he is just reminding himself the difference between a deer, antelope and big foot.

Chance Barrett, Montana native grew up farming and ranching in Winfred, MT and moved around working on ranches until his wife convinced him to move back to Miles City in 2016. He has been hunting since he was knee high to a grasshopper. Chance is a jack of all trades; he builds saddles, tack, gun accessories, trucks and does day work for ranchers around Miles City. 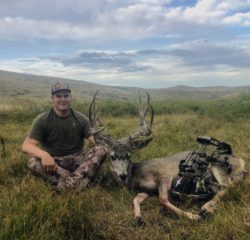 WE LOOK FORWARD TO WORKING WITH YOU